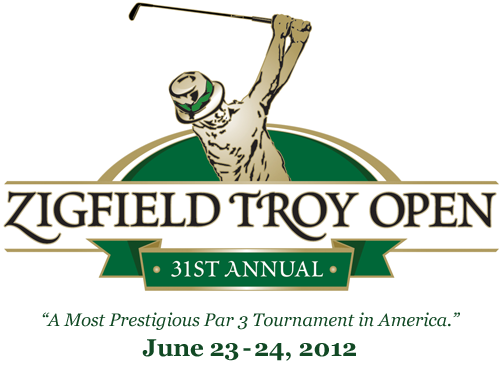 After finishing in second place in four Zigfield Troy Opens, including three times in playoff losses, Sumeet Arora of Woodridge, IL finally shed the bridesmaid title at the 2012 ZTO.  He did it in record fashion, tying the 9 hole and 18 hole course records set by Josh Butterfield in the 2006 ZTO.

In the opening round on Saturday, Arora was at 4 under par when he arrived at the 9th tee.  Before he left the tee, he had tied the 9 hole course record at 6 under par after aceing a sand wedge 86 yards into the hole tucked behind the right-hand bunker.  Ironically, after a bogey on the same hole the second time around, he totaled 1 under on his back nine to tie the 18 hole course record of 47, seven under par.

Arora never lost the lead on Sunday, but was tied for a short while with Chris Daly and Rick Grassel at 5 under with 5 holes to play. He put the tournament away with birdies on his 15th and 16th holes, and an easy par on the difficult 8th hole, his 17th of the day. Sumeet had a three shot lead as he stood on the tee of the final hole.  The 80 yarder again extracted some revenge on Sumeet as he missed the green and bogeyed, while playing partner Jason Buffone birdied, reducing his victory margin to one stroke.

It was an extra meaningful weekend for Arora for multiple reasons. First, because he wasn’t sure he would be able to compete in the ZTO after having to quit during the U.S. Publinx qualifying just three days earlier because of a pulled groin muscle. Second, because he was finally able to shed the bridesmaid’s label in the event he has tried to win since 2002.  Third, because he won in record tying fashion.  And fourth because he was victorious over Buffone, the two-time defending ZTO champion and recent Joliet Amateur champ, who had beaten Arora for the 2010 title in a one hole playoff and was trying to be only the second ZTO champion to claim three straight Zigfield Troy Straw Hats in the tournament’s 31 year history.

Special mention must be made of Tres Steffey’s six-under par 48 on Sunday.  The course is always set-up with longer tee shots and tougher hole locations for Sunday, and Steffey’s stellar round was three strokes better than any other competitor.

The 105 entrants this year created the largest ZTO field in over a decade and the strongest field in its history.  74 players competed in the open division of the 36 hole tournament won by Arora.